China’s most prominent fashion week hosted its fall/winter edition from April 6 to 13. With the pandemic situation, Shanghai became one of the only cities to host a full physical fashion week in 2021. The theme of the event, “Blooms of Spring,” was chosen to reflect the post-pandemic era. Among the brands that participated in this year fashion week also Leaf Xia, TuYue, and Moodbox, at Shanghai Xintiandi Taiping Lake Park Land location; AnnoMundi, UMAMIISM Oyster, Toile, Sorgenti, and Five Koh at Tank Shanghai art space venue, by Labelhood (China’s first pioneer fashion experience community and brand management incubation platform) location; C’era una Volta at 800SHOW, the location for the Kids fashion week. The Youtopia collective project by Labelhood hosted shows from newcomers including:

The show of the collection “Gleaming Water” started with two dancers imitating the human reflection in the water, implying the duality of virtuality and reality. The collection was full of folding elements, used to imitate the texture of the waves and the fabrics used large-area printing to imitate the gradual change of water billows and the floating state of objects. 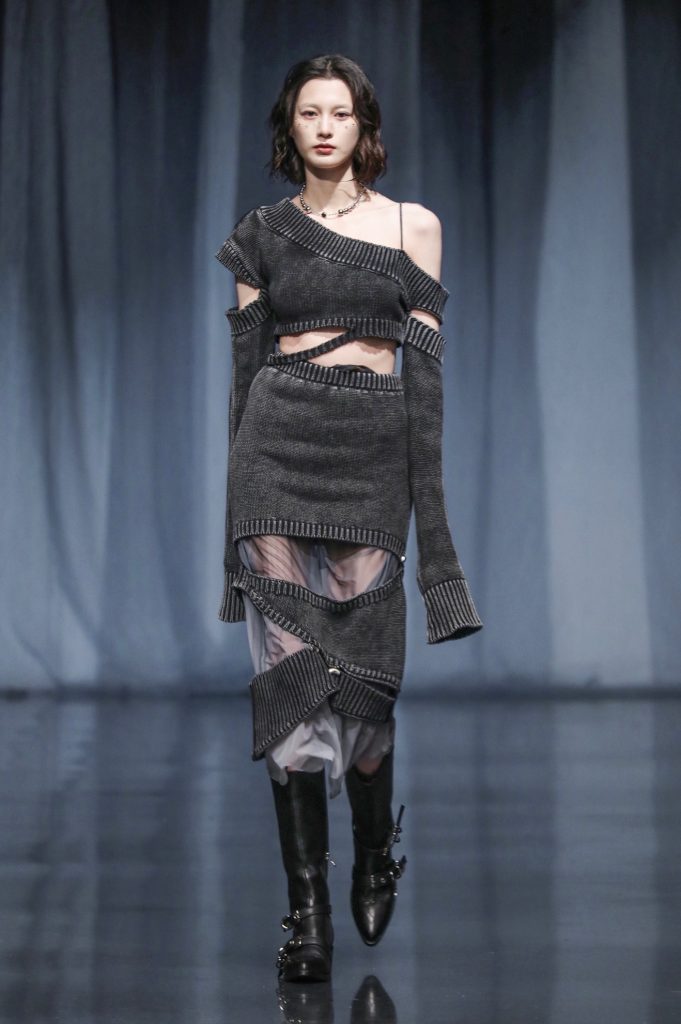 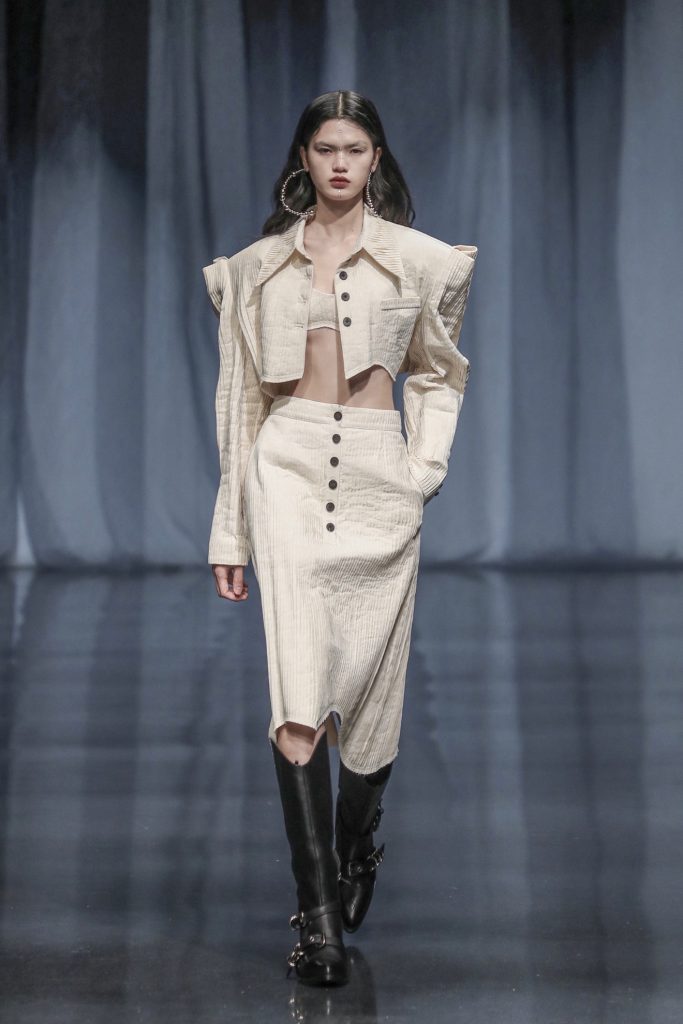 FIVEKOH️® using color, mood, shape, sound, and other factors, through clothing, merge art, music, dance, and sport together to create new things. The brand follows the ideological pursuit of Asian youth, looking forward to a kind of independent and wildlife attitude in adversity and expressing a rebellious spirit of self-existence. The latest collection is a mix of innovative shell fabric and synthesis technology, to develop a new structure of clothing. 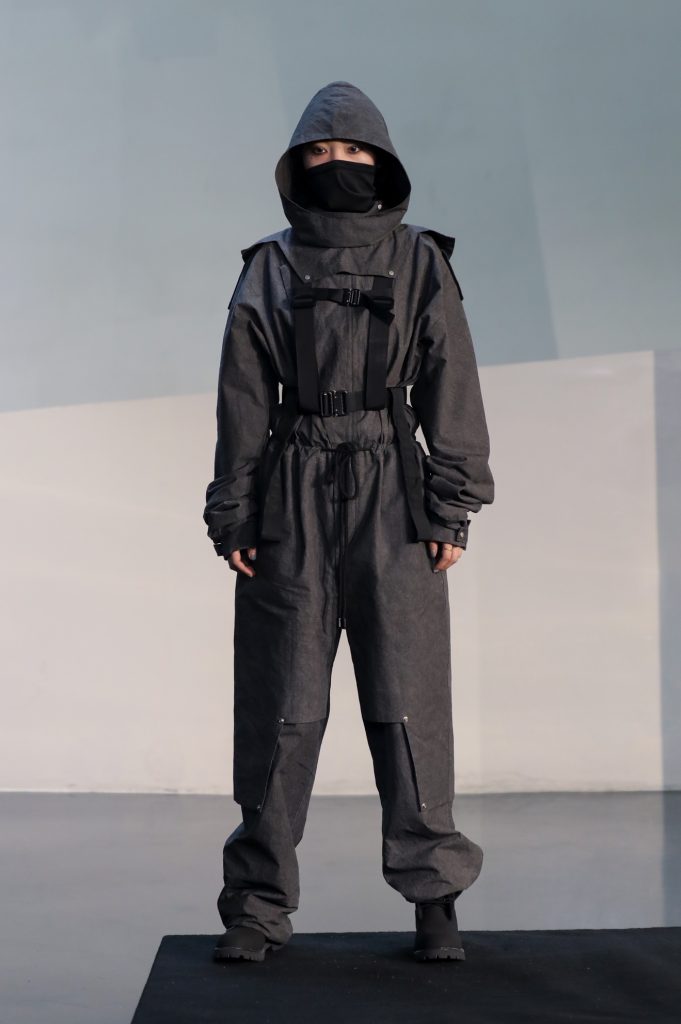 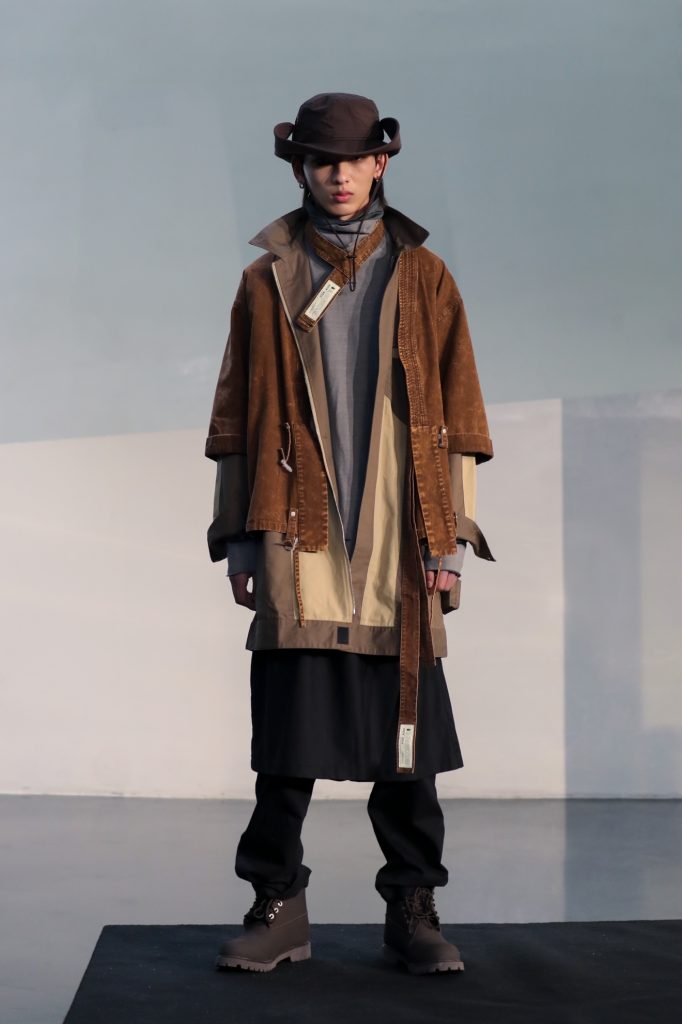 The post ’00 designer presented a men’s urban clothes collection called “Bedroom Dialogue”  with different styles,  suitable for daily wear. “Does the clothes give you a sense of home? The clothes you wear are my other home.” 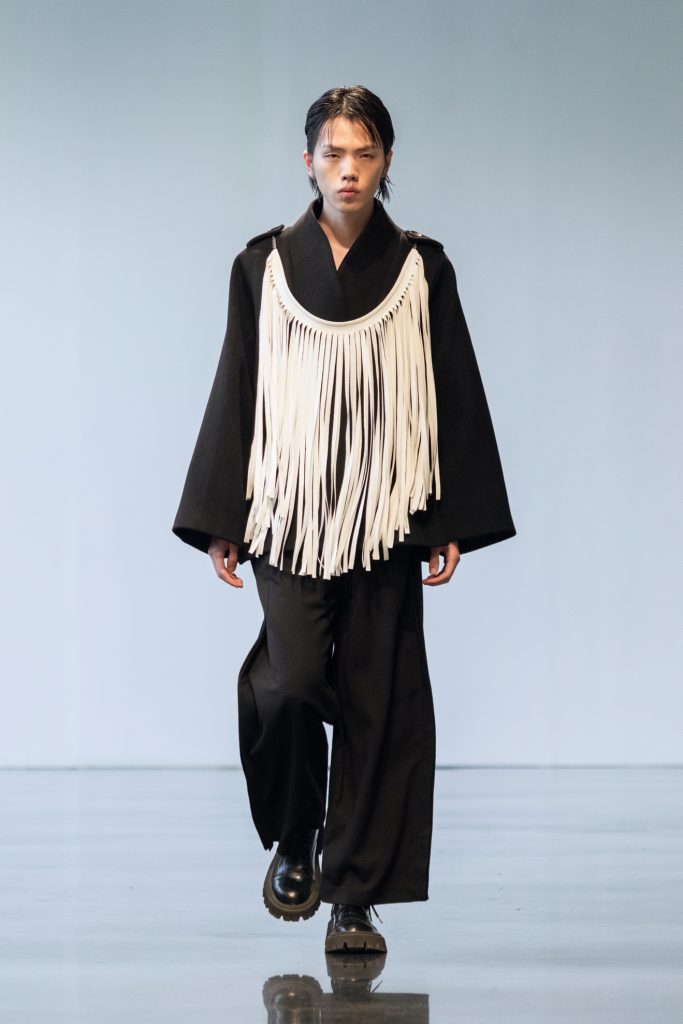 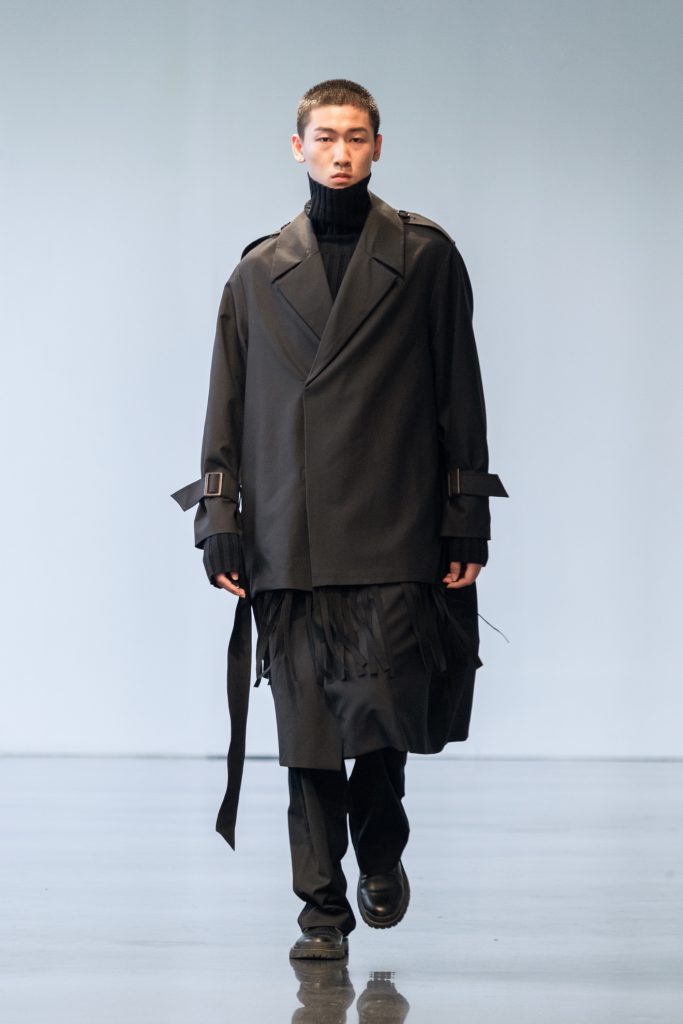 The brand was established in April 2020. The feeling of spring water is pure, quiet, with some mystery and poetry. The brand features gentleness, retro, and futuristic style. It’s a celebration of women and a commitment to inspire women to see their own value and develop as independent individuals. In the process of design, Ju Ruiyang, the designer, devoted herself to finding inspiration from the texture of the painting and real life, and through repeated experiments, the printing presented a picture of a complete artwork, showing the oriental beauty from the perspective of the new generation. 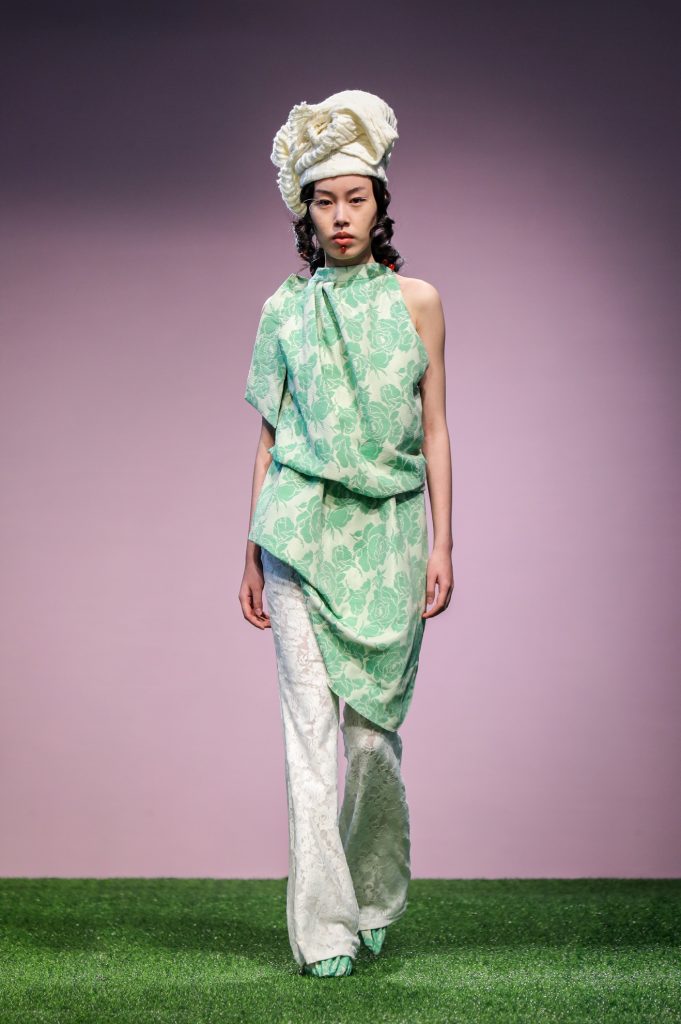 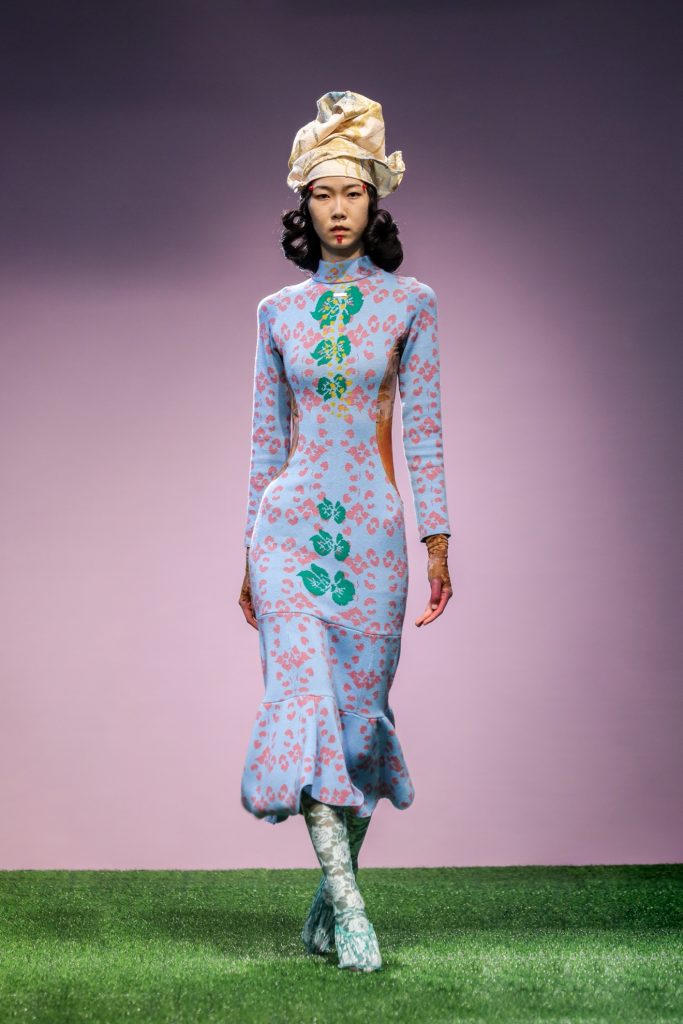 At Tank Shanghai art space it was also the time for UMAMIISM Oyster with the collection “QUIET FRIEND”. The collection was inspired by fantasy novels and tales of the ’90s, mixing together elements of romance, adventure, and the outdoors. The details gave almost a feeling of the Paleolithic era of clothing while neutral and earthy tones make up the majority of the color palette.  The name Oyster is inspired by the song named Oysters by Taiwan independent musician Zhang Xuan. Oyster has rugged, primitive shell, but soft, romantic hearts inside. The plot of oyster is also the plot of Xiamen, which serves as a memorial of the designer’s study time in Xiamen. Umamiism Oyster takes the highest standard in terms of design team configuration, fabric and visual expression. 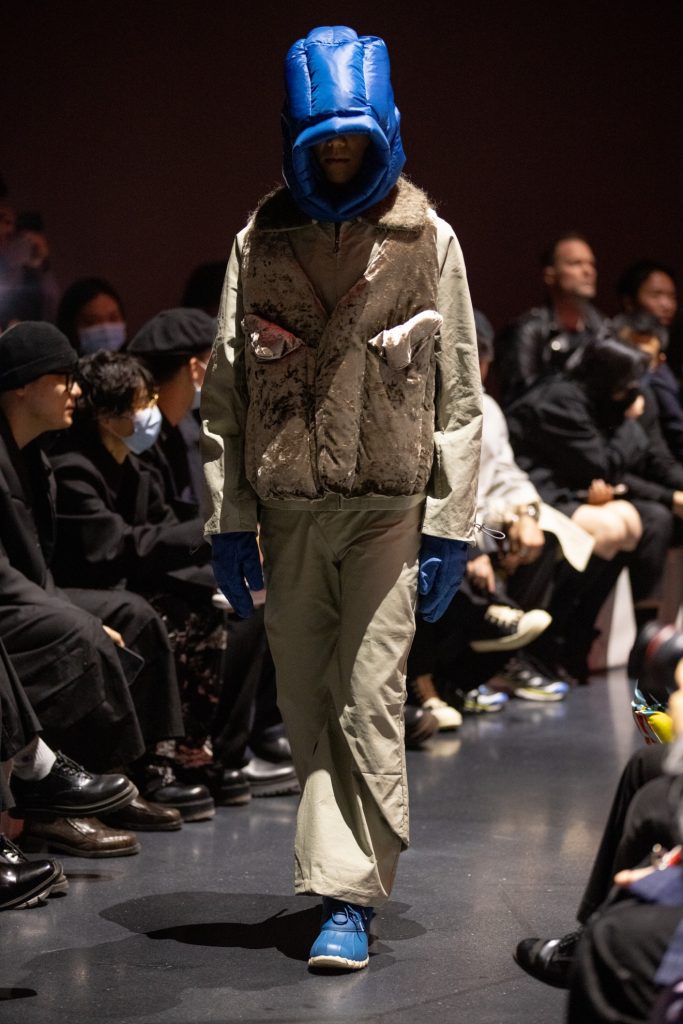 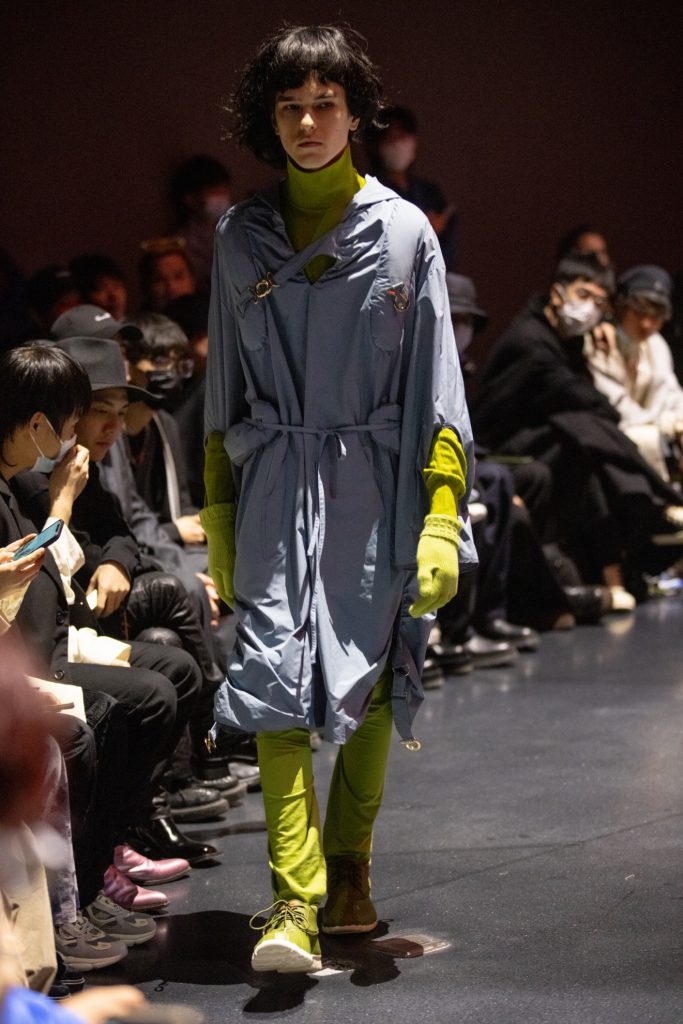 The famous Chinese fashion brand Leaf Xia colorwonderland released the latest season of works, inspired by “Alice’s Adventures in Wonderland”, in Xintiandi. The fashion label from the 90’s Chinese designer, YiQi (Leaf) Xia, was launched in 2016. Xia takes her inspiration from humanity, love, and a joyful engagement with color, print, and collage. As all her collection also the latest one presented oversized shapes with colorful silhouettes that play on the classic. Her goal was to inspire fans to welcome possibilities instead of being discouraged by limitations. 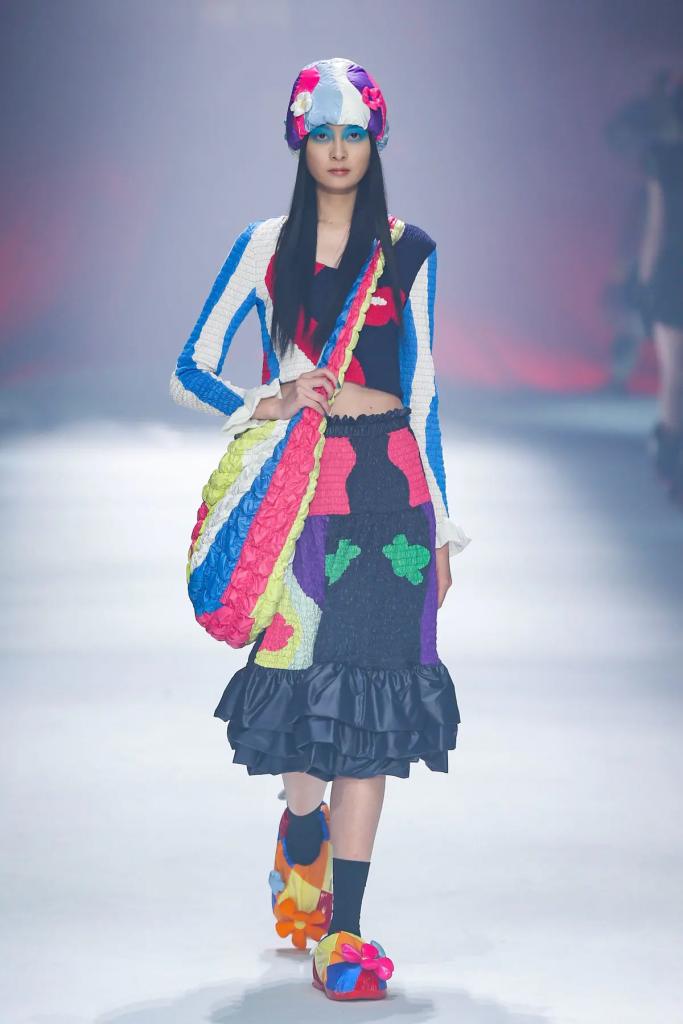 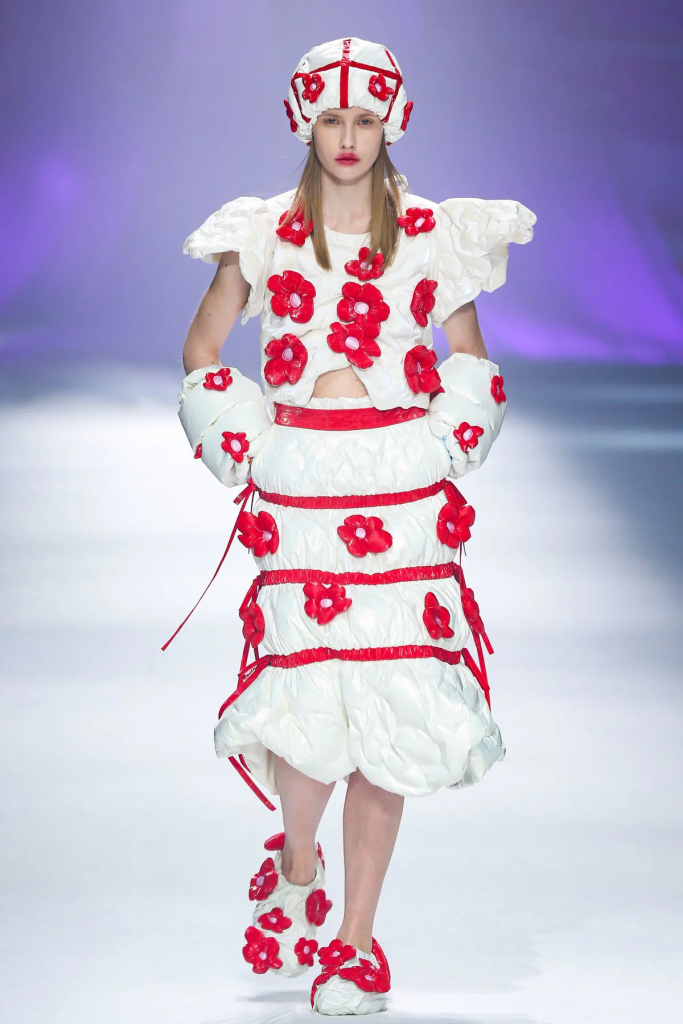 TUYUE series chose styles that are mostly worn in daily life, such as cotton clothes, shirts, trousers, skirts, etc., combining Chinese elements and functional style to achieve genderless wear. The latest collection was called “Survivor’s Diary” and it was a cooperation with artist Chen Jin. This series used recycled materials. The brand re-dyed all kinds of scraps from the past, such as real silk, linen, and pure cotton, and then combines them to form new fabrics and put them into use. 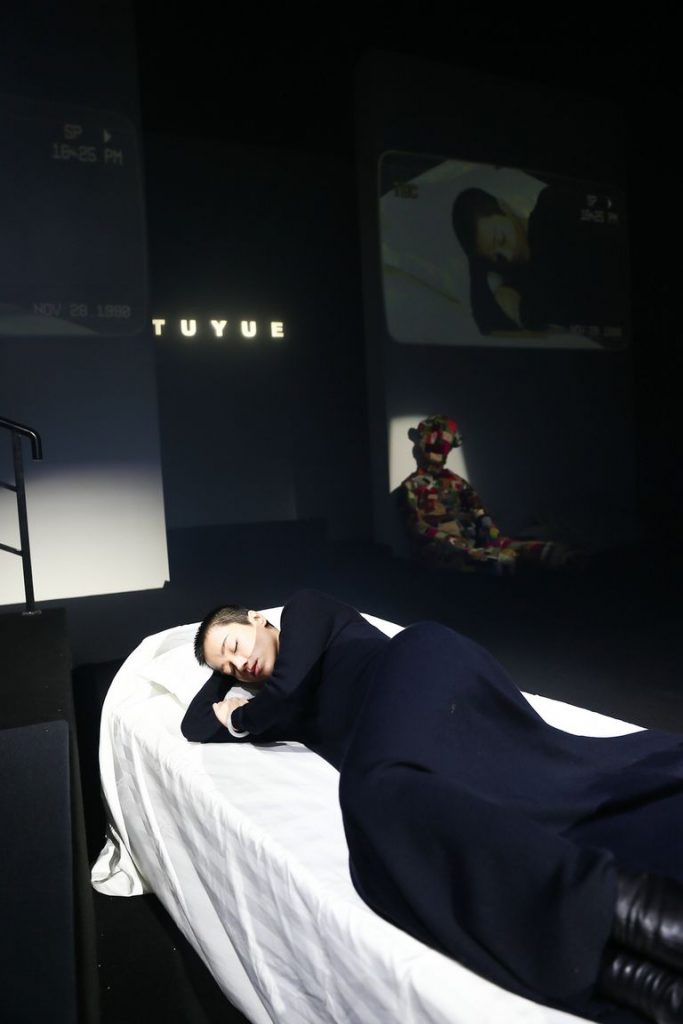 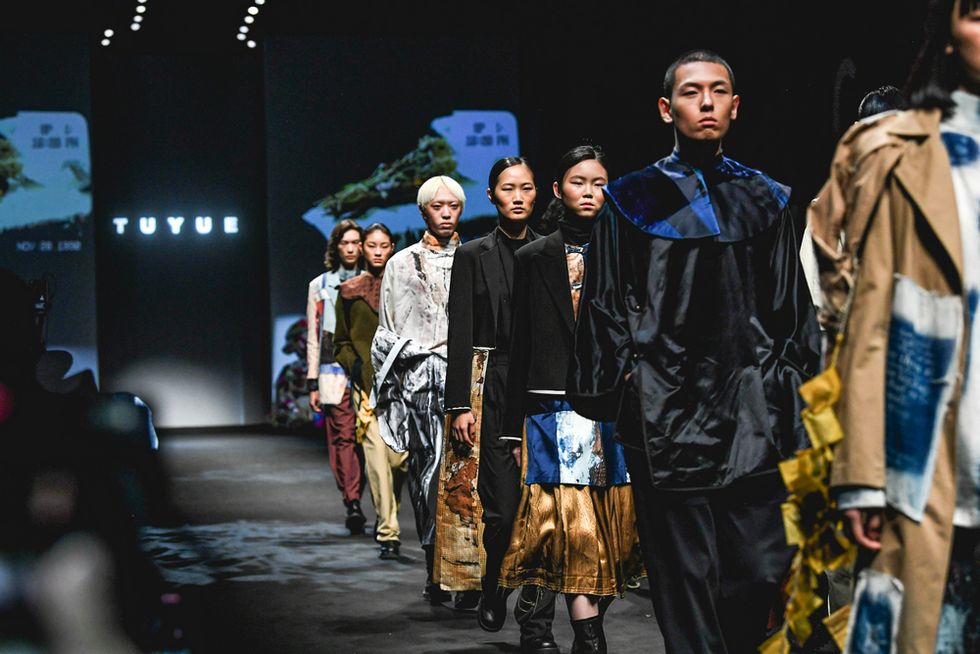 This brand is not new to the fashion game as it was created by designer Qin Xu in 2013, The theme of this season’s series was “TOI ET MOI Qing and Wu”,  just like its name, the brand is a box of mood that every collection comes from a real story, the latest collection was originated from the journey in the life of designer Qin Xu. The Moodbox collection incorporates traditional Chinese handicrafts such as Qiang, Hami Uyghur,  Guizhou seed embroidery, and other traditional Chinese handicrafts. 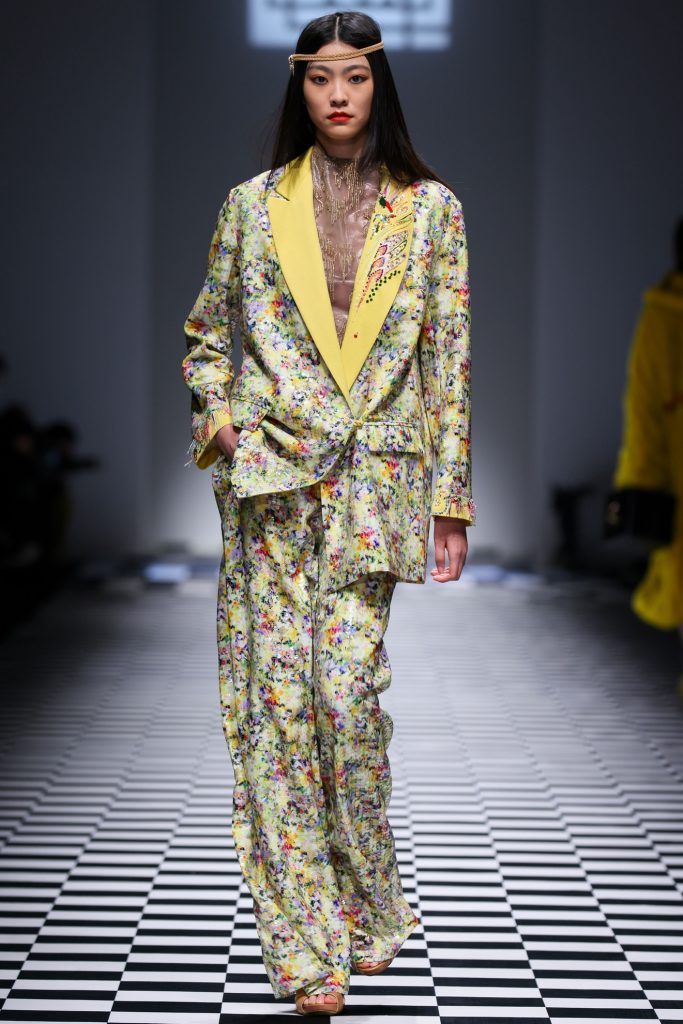 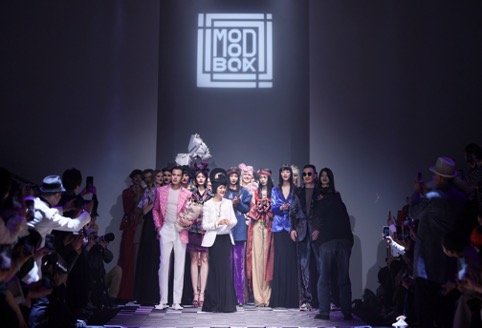 Last but not least the Italian kid’s brand C’era una volta came back again to the Shanghai Fashion Week.

C’era Una volta’s new spring and summer series was born in a special period. In the past, we enjoyed the freedom and took it for granted. Now that we experience the lack of freedom, we have the opportunity to focus on the essence of life, think about our priorities, and continue to dream. In the limited travel time, the photos of previous family trips became the biggest source of inspiration for the brand founder and designer Emanuela Nurra, which allowed her to break away from reality and start to create. The imagination and innocence of her daughters also gave her great inspiration. 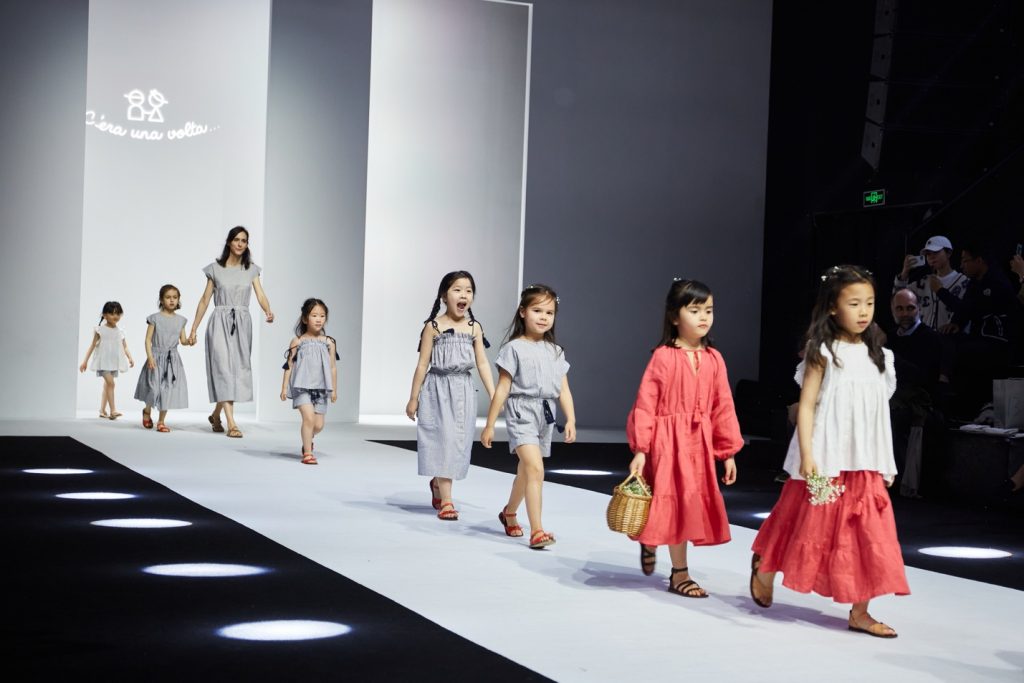 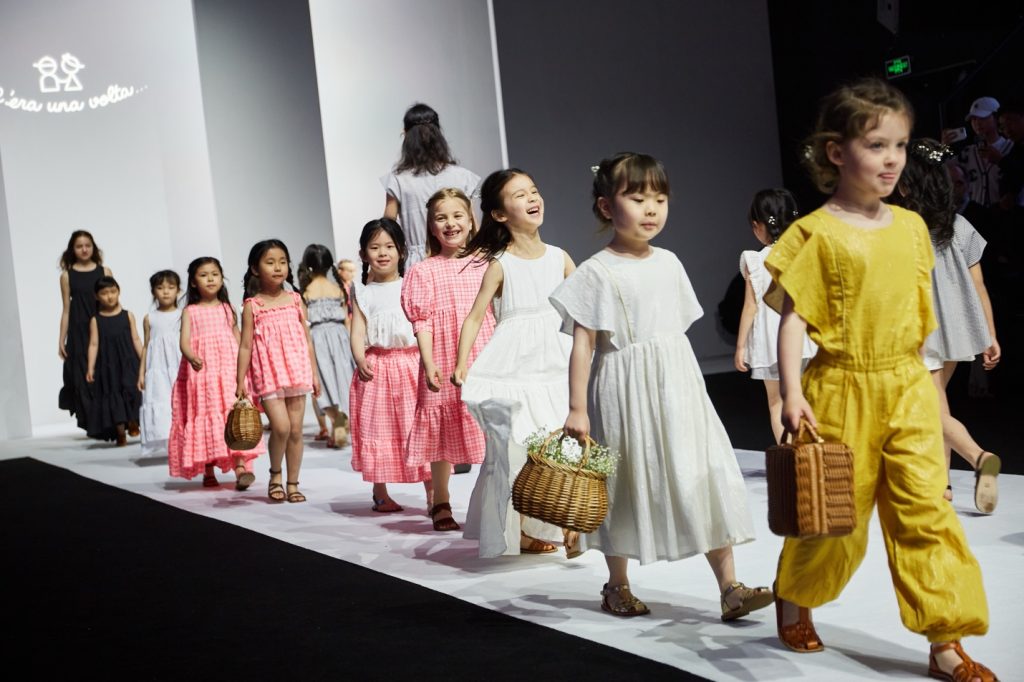 Many B2B events were held at the same time as Fashion Week, including the Mode Shanghai Fashion Trade Show and Fashion in Circulation exhibitions and symposiums.